Richard Seymour: Taking To New Heights With The Leica S

Richard Seymour is a professional photographer who studied professional photography at The University of Westminster in Central London. He has worked internationally for numerous UK and international brands such as BMW, Vodafone, Oxford University and more. He is a member of The Association Of Photographers, London.
Q: Hi Richard, to start off with, can you provide us with some background on The Shard project? What is The Shard? And where did the idea come from?
A: Yes, of course. The Shard is now the tallest building in the European Union. Designed by Italian architect Renzo Piano, it stands in its own free space on the Southbank of the River Thames in London. Photographer Chris Martin and I decided to jointly shoot the Shard and elements of the City of London for our respective stock libraries. The existing images of the Shard depict it either being built or are quite conventional in their photographic approach. I was aiming for a highly stylized series of images that would be different to anything we had seen before of this iconic building.
Q: You shot these images with the new Leica S, correct? Can you tell us a little bit about why this camera fit your needs for this project?
A: I only ever shoot my aerial work on The Leica S. There are numerous reasons why this camera exceeds the capability of DSLRs or other medium format cameras in this tough environment. The new refined auto focus capabilities of the S astounded me when I first tested them for aerial work – with many autofocus systems the lack of contrast in the scene due to aerial haze, etc. can mean that they struggle to lock onto focus – the S system is the best I’ve found in this situation. It consistently succeeds where others fail. The excellent ergonomics of the camera mean that its easy to use when every second counts and where one can’t afford to struggle with handling a poorly designed system. And lastly of course is the exceptional dynamic range of the S sensor and its superb performance at higher ISO’s. It can sometimes be inevitable that one has to shoot at high ISO ratings with aerial photography to cope with wind buffeting and aircraft vibration, with a DSLR this pushing of the camera’s limits would make me very anxious, but I never have to worry now with this system. 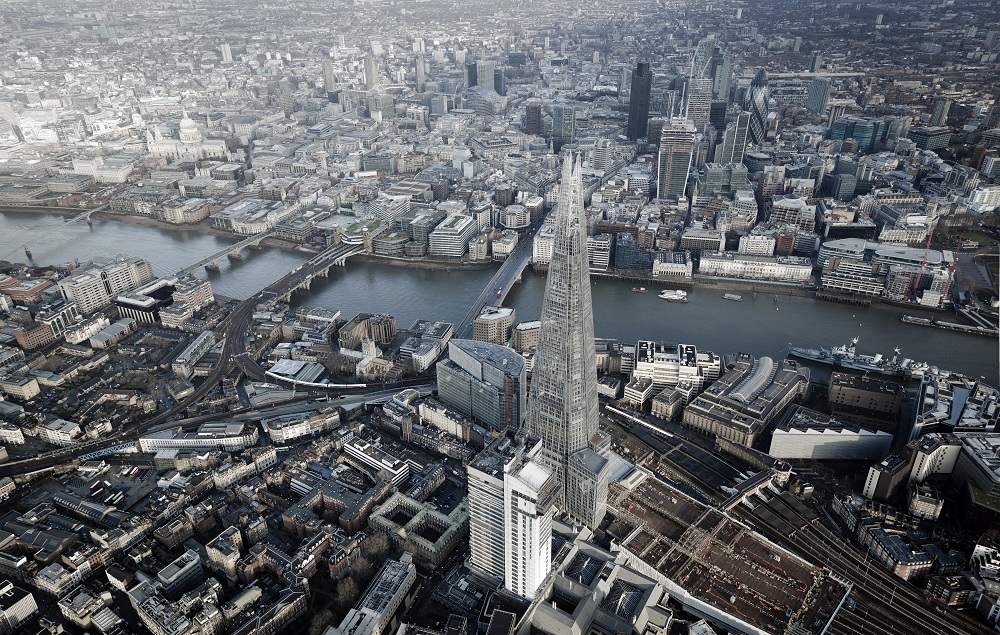 Q: What lenses did you use on these images?
A: I tried out the new 30mm for the first time on this job – it was a very pleasant surprise. In the end three of the four principal images used this lens; the last was shot using the excellent 70mm. The 30mm brought in a vast scene giving the viewer a sense of the scene the public will see from the viewing gallery. At some stages we were really quite close to the skyscraper, special dispensation by the authorities was granted to enable us to do this.
Q: We’re curious about shooting from a helicopter! Can you describe for us what it’s like shooting out of a helicopter?
A: In my talk on the Leica stage at last year’s photokina I joked about wearing a coat – the 2 main enemies in the helicopter are vibration from the hovering helicopter combined with gusting winds and the bitter cold when the doors have been removed. If one isn’t correctly protected from the cold your energy drains fast and it becomes difficult to concentrate properly. The other thing is you have to have quite a strong stomach for motion as looking through a viewfinder at a constantly moving target can sometimes make you feel sick quite quickly. Finally a head for heights is useful as there is nothing between you and a 1000 ft. drop but one’s trusty safety harness. The one aspect of aerial work I don’t like is the lack of control – everything from an ill tempered air traffic controller through to other aircraft and rapid changes in cloud cover can all seriously impact on ones ability to get the shot. On the ground I can normally guarantee I will have all the production elements in place – that’s far more difficult with aerial photography
Q: Furthermore, what kind of conditions must be in place in order to shoot from a helicopter? Do you have to wait for the right weather?
A: Yes – the right weather conditions are essential, flat overcast light rarely works – but then again as you can see from these dramatic pictures sometimes it’s best to not have totally clear skies either. It really depends on the look I want. 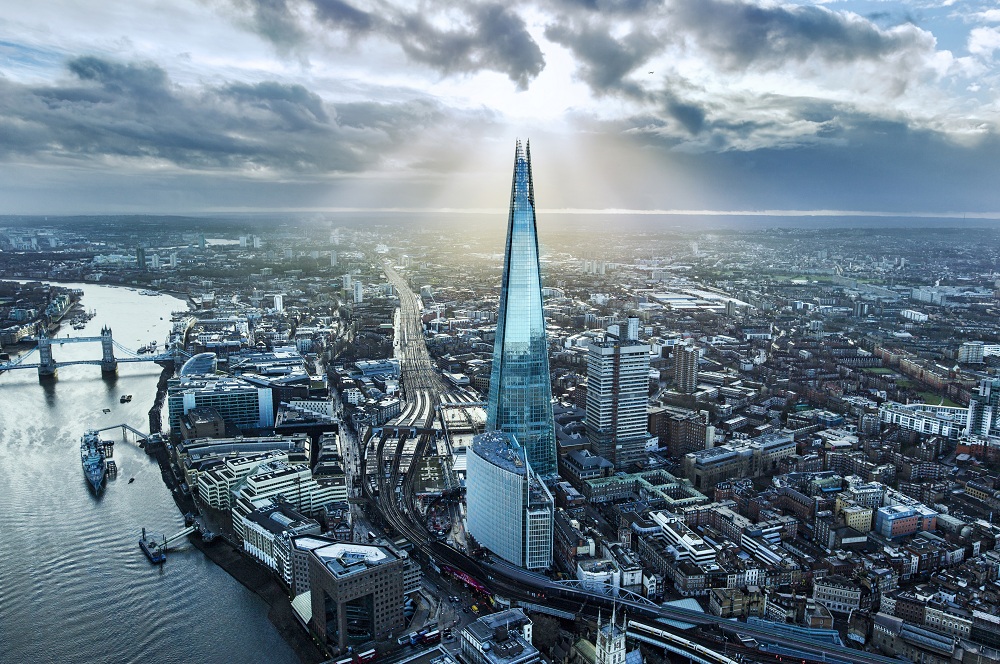 Q: The lighting in these set of pictures is quite interesting. For instance, in one shot it looks like there is a spotlight shining down from the heavens on the building. How were you able to achieve this look and shot?
A: I call it “enhanced reality” the break in the clouds was real when I shot this but my retoucher Nick Humphries has enhanced this aspect and provided greater contrast and definition – something we find easy to do with the superb dynamic range of the files from The Leica S. 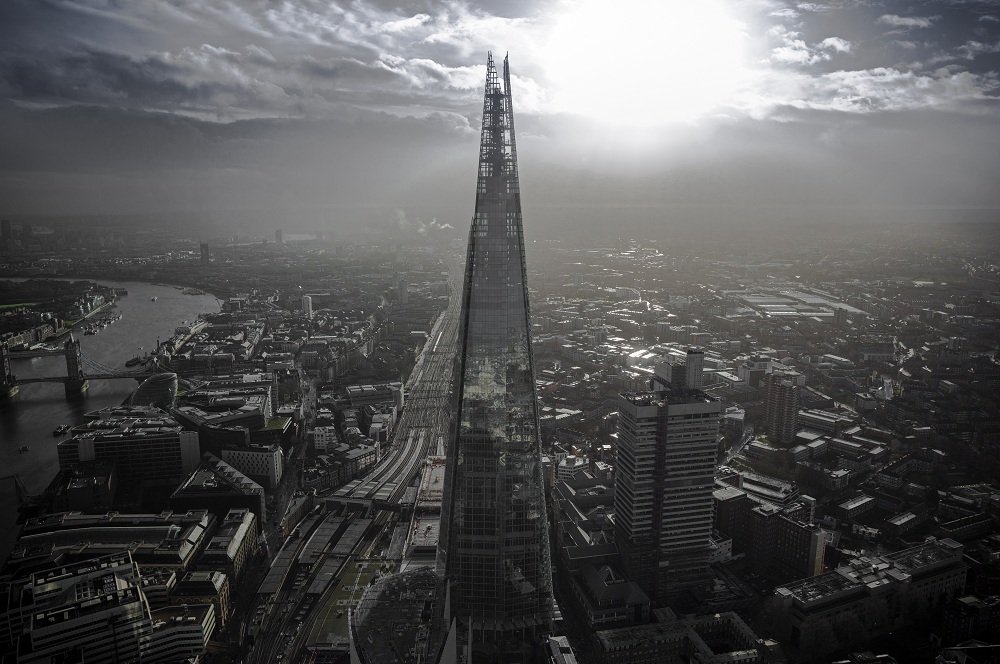 Q: One image has a darker and more eerie feel to it. Were these images taken on the same day at the same time? Was it a conscious decision to show the building in different lights? If so, why?
A: Yes, all were taken within 20 minutes of each other – we had constantly evolving lighting conditions which gave us variety but I was very keen to maximize their commercial viability by giving the images different post production treatments.
Q: We interviewed you at photokina where you joked that you liked shiny objects. The light off of the building certainly makes the Shard shine. What do you think a ‘shiny’ object brings to a photograph and why do you like them?
A: I think that reflective surfaces are compelling in photographs and often ‘lift’ the key component. It’s a great device to draw your eye to the principal element of the story. Working in the technology and architectural sectors though means that I often by default have shiny reflective things to shoot. The most interesting thing about the glass reflections in the Shard is they are at their most impressive from the helicopter at 800 ft. rather than at ground level where the angle of the glass reflects the light upwards. It’s a shame really as most people will only ever experience the Shard from street level.
Q: How do you hope the viewer responds to these?
A: The response from all those who have seen them has been excellent – I can only hope that those looking for a distinctive image of the Shard in the stock libraries will agree. 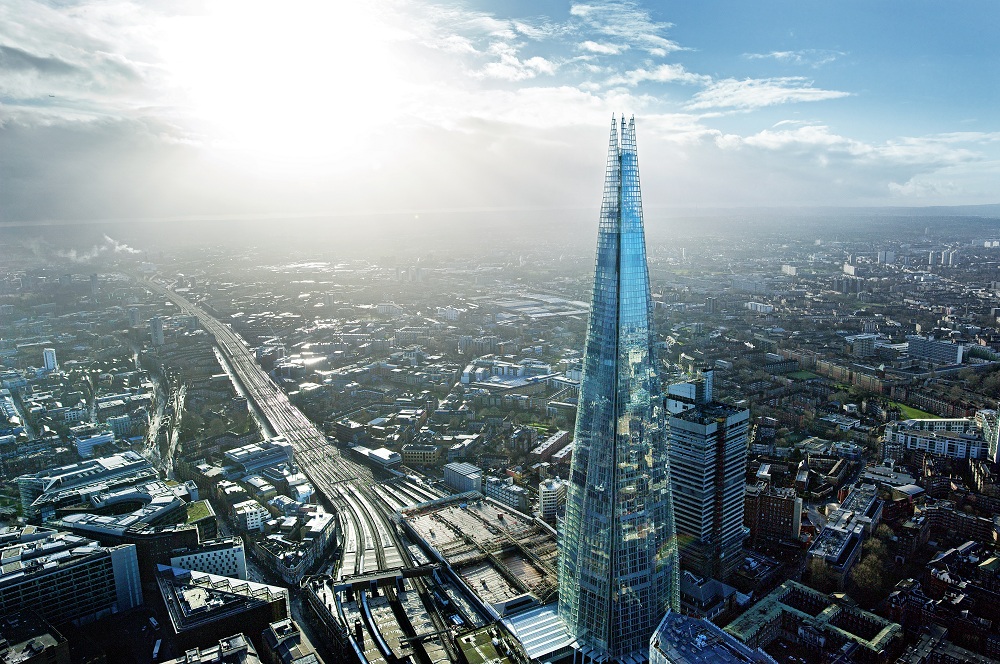 Q: Do you notice any improvements or differences with The Leica S compared to the Leica S2?
A: As I mentioned above, the improved focusing is a revelation – and it was good before! The improved high ISO quality is exciting and the GPS tagging is also great for my stock work. Finally – the 30mm was the making of these images.
Q: You’ve spoken about hyperrealism in your work. Would you consider your work to be in this genre? How would you describe your photography?
A:: Yes, it’s about taking mostly real world elements and, either by distilling down just those parts of a scene that have real power or by the use of composite retouching, I hope to make things look as fascinating as possible. I do think the phrase ‘enhanced reality’ is the best way to describe it.
Q: We’ve seen you shoot out of a helicopter with The Leica S. What other ‘extreme’ or ‘unusual’ conditions would you like to test the system on?
A: I’ve used it in -20 degrees in Northern Norway. It was totally fine, the weather proofing on the camera should mean it should perform on say an ocean going yacht; however, would I want to risk such a beautiful valuable kit on a rolling platform with deep sea surrounding us…maybe not!
Thank you for your time, Richard!
– Leica Internet Team
For more information on Richard, find him on his website, Facebook, Twitter and blog. Learn more about Nick Humphries, his retoucher, here.