Fred Mortagne a.k.a FrenchFred: Putting Skaters in their Environment and Beyond, Part 1

The Leica camera Blog Uncategorized Fred Mortagne a.k.a FrenchFred: Putting Skaters in their Environment and Beyond, Part 1

The internationally renowned skateboarding filmmaker and cameraman, Fred Mortagne – a.k.a FrenchFred – shares in this two part series a selection of images taken with a Monochrom in Paris, Barcelona, Lisbon,  Lyon, among others. He also shares his thoughts on his career and the evolution of this urban culture that he has been part of for over 30 years now. This work is presented as part of the Red Bull Illume competition, which Fred Mortagne was a winner of during its first edition in 2007, and which Leica is a partner of this year.
Q: Fred, how did you become involved in skateboarding culture?
A: It was a long time ago, over 30 years now, when I was in third grade! At the time, a group of friends and I would just skate downhill, sitting on our boards, which were like toys to us then. Then the skateboard boom took off in France, partly thanks to the film “Back to the Future”. Right from the start, I was crazy about skateboarding and when I got more into it, I realized that there were a number of magazines and videos about the skateboarding world. That made a big impression on me; I used to love watching all those videos from abroad. They would only come out every two to three months, so you had to be patient and wait.
That’s how I got to wanting to make videos myself. Firstly, for our own pleasure among friends, then because I quickly realized that it was a good way to help skateboarders find sponsors. And it worked for some of them! Right from the very start, I felt a real interest on a national and even European level, that there were people out there who wanted to see videos from Lyon, local videos. That’s how it all started. 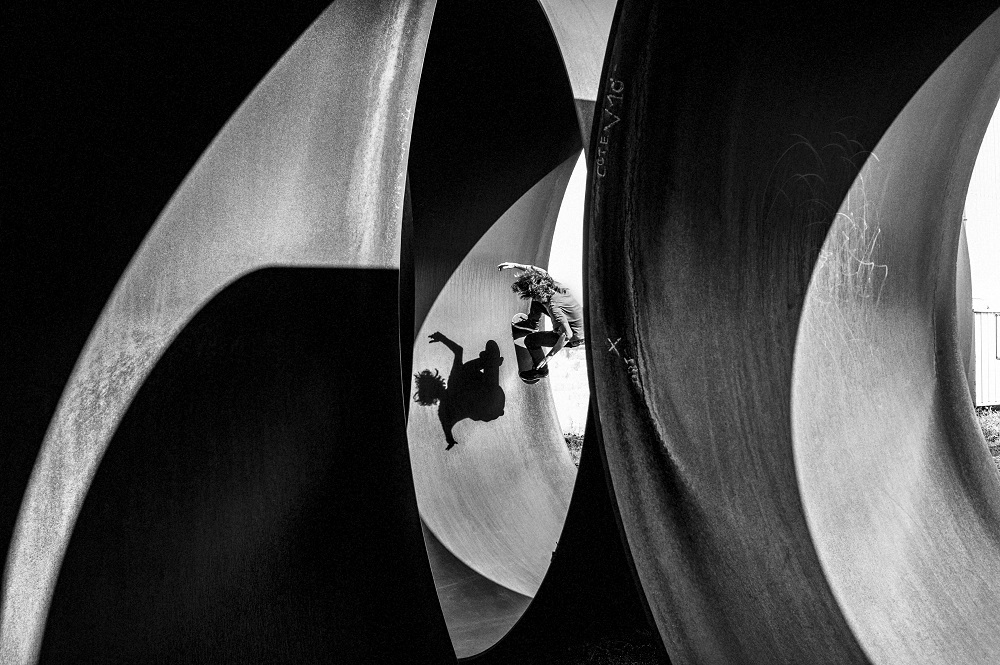 Q: And  how did photography fit in all that?
A: Video remains my main activity, but, after working professionally in video for ten years, I realized that, when I was filming outdoors, I could visualize what seemed to me potentially interesting photos, whereas the photographers who were with us didn’t see them. So I thought maybe there was something to be done there, and as soon as I got the chance, I took photos. It just so happened that they were really different to those taken by the other photographers. That’s what’s great in photography, and video for that matter: everyone has their own viewpoint and there are so many possibilities for a same place or subject.
I thus rapidly found a style and I’ve stuck to this direction, which has worked quite well! 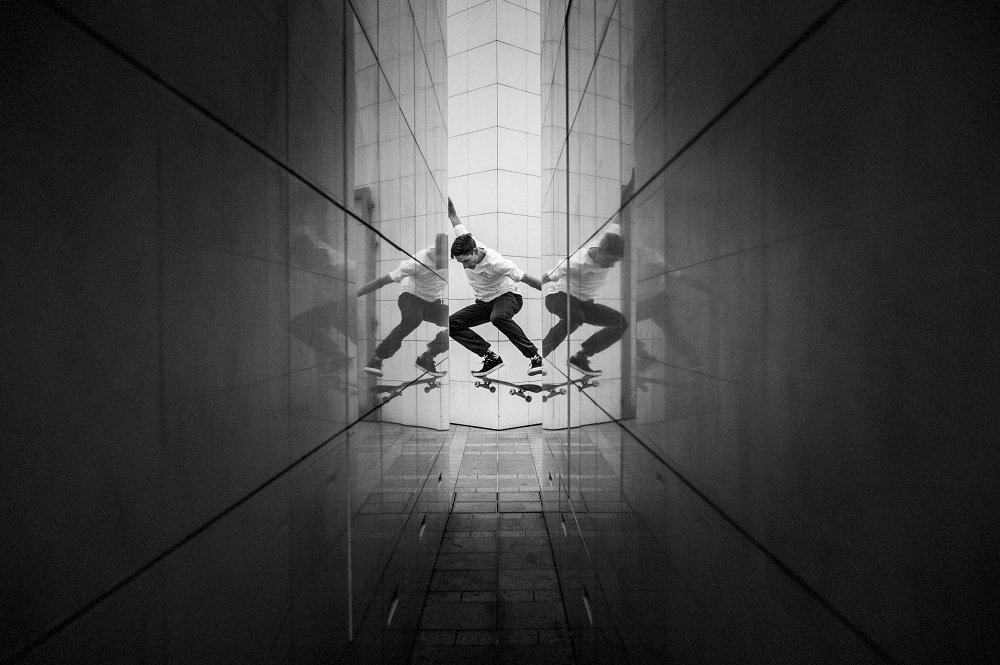 Q: How would you define your style?
A: I think that I developed it as a counterpoint to my video work. The videos I make are primarily commercial. In the early days, you above all had to show potential sponsors that such and such a skateboarder was the best, etc. The narration was thus necessarily action and performance-based. My photos came in conjunction to that; they were my own personal project and as a result, I felt much freer to explore. In my photographs, there were never any really difficult tricks; I tried to bring out a more artistic dimension instead. I have always found skateboarding to be an extremely aesthetic culture, even for people who aren’t particularly familiar with it. There’s something that takes place with the movement of the arms, given style… And precisely, by photographing quite straightforward tricks, I realized that it remained accessible to a non-specialist audience. I was interested in sharing this culture, this aesthetic with people who are not especially familiar with it.
With skateboarding, you travel a lot trying to find new spots; it’s a bit like surfers always out looking for the perfect wave… For us, these spots are often around recent buildings, in modern architectural ensembles which also often happen to be very specific-looking and photogenic. In video, you film very close up, with fish-eye lenses, so you completely lose this dimension. With my photos, I wanted to put the skateboarders back in their environment and show that what mattered most wasn’t necessarily the skater, nor the architecture in itself, but the two combined, the relation between them.
So, in my pictures, the silhouettes of the skateboarders often appear to be very small, whereas with the fish-eye, when you’re only a metre from the skateboarder, they take up the whole surface of the image. So it’s the exact counterpoint! 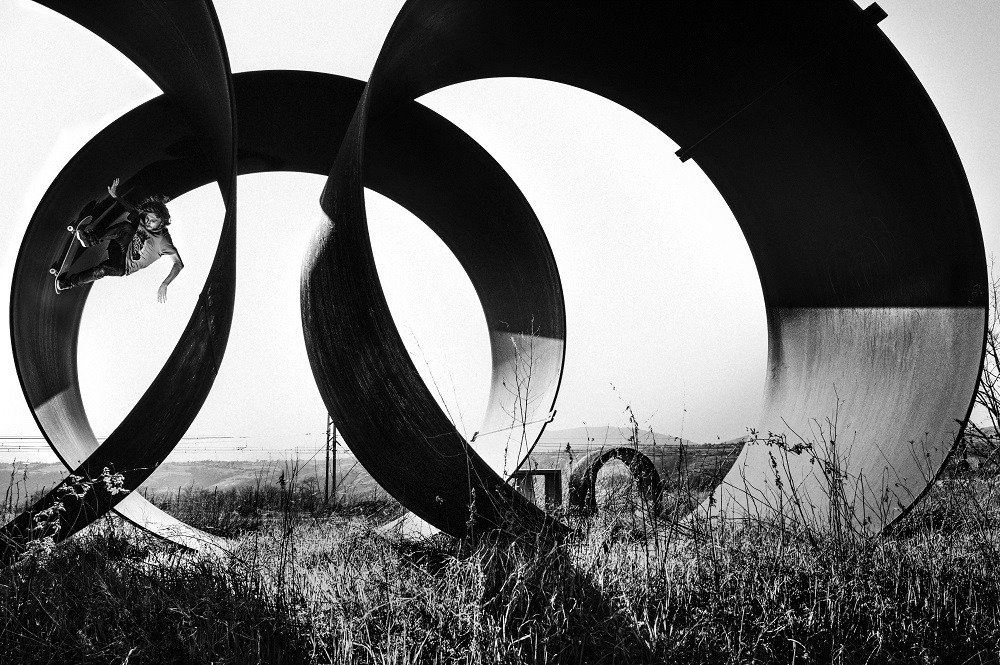 Q: What other connections do you see between your approaches to photography and video?
A: I work in both photography and video and couldn’t do just one or the other. I love both because they are complementary. Neither medium is perfect. In video, you can capture the movement, the speed, but everything moves very fast and you don’t necessarily have the time to become immersed in the scene, whereas in photography, it’s fixed, you can take the time to analyze all the details in the image, but, at the same time, you no longer have the sense of the skateboarder’s speed, you lose this fundamental dimension… So I like to try to combine the two.
That’s what I was trying to do when I shot the video “Hybridation” a while ago now. My idea was to film very statically and to frame as I would in photography. To me, it was photography in movement.
It really worked, even for audiences who weren’t very familiar with skateboarding. It was a black-and-white video, with quite straightforward but highly photogenic tricks. I was happy to have combined video and photography in this project. I have to admit a slight contradiction, however. While I always try to renew what I’m doing and change style in video, with photography, I try to stay in the same direction, to compose work that has an overall coherence.
Q: Does keeping to this approach pose any particular challenges?
A: As skateboarding is more or less illegal, you can easily be thrown off the spots you’ve chosen, which means that we often have to negotiate with those who see skateboarding as a simple game that ruins everything on its path. From a technical point of view, however, there’s no particular difficulty apart from that of observing the scene and trying to find interesting angles for your shots. So you mustn’t hesitate to step back, to retreat 20 to 30 metres to discover a new dimension to the space, for example. So I keep on the move, I skate round the spot and keep my eyes peeled!
Q: What are your photographic influences? Have any photographers particularly influenced you as you’ve developed your own style?
A: To begin with, I had zero photographic culture. I started taking pictures to try out ideas. The only references I had at the time were skate photographers, but they didn’t inspire me at all, given that I was trying to do something different. It was only much later, when I started getting more interested in photography in general and going to see exhibitions or buying photography books that I realized that I was drawn to photographers whose photos shared similarities with what I had done myself, without knowing their work. Even if it wasn’t in the skateboarding world I was involved in, it made me aware of a kind of photography that already existed. I still don’t have the biggest photographic culture in the world, but I am drawn to a lot of 1970s photographers who worked in black-and-white: Josef Koudelka, René Burri, Henri Cartier-Bresson and Raymond Depardon. Or Willy Ronis. I totally relate to his pictures!
Thank you for your time, Fred!
– Leica Internet Team
Click here to read the interview in French.
See more of Fred’s work on his website, YouTube, Facebook and Instagram. View his Fine Art Prints and Postcards taken with the Leica M Monochrom.