Rijasolo: On the Antananarivo Skateboarding Scene in Madagascar

The Leica camera Blog Uncategorized Rijasolo: On the Antananarivo Skateboarding Scene in Madagascar

Born in France in 1973, Rijasolo is a photographer and photojournalist.
Since Miverina, a return to Madagascar, his photographic series in which he sought to confront both his imagination and his childhood memories with the country that his family history ties him to, Rijasolo has moved to ‘la Grand Île’, where he works on an array of projects and collaborations. Founder and member of the Riva Press agency, Rijasolo has published two photo books: Madagascar, nocturnes and Akamasoa, Rêves d’enfants – 25 ans d’action du Père Pedro.
Q: Our last interview for this blog in 2010 focused on your six-year Miverina, a return to Madagascar project. We started the interview with the text that accompanied that series in which you referred to a kind of obsession with your Malagasy origins. Since you’ve moved to Madagascar, how has your photographic work evolved?
A: My way of working hasn’t fundamentally changed since I’ve been here. My view of the country hasn’t either. While I’ve learned to adapt to the rhythm of the country, to blend in with the crowd, to speak the language a bit better, and to adapt to the mentality and patterns of Malagasy thought, I still feel a sort of illegitimacy that relates to my double culture, which, I realize more and more, leans more towards Western culture – a French education, a Malagasy heart.
As a correspondent for Agence France-Presse (AFP) and other French media, I work a lot on commissions for the press, but also in the corporate, fashion and advertising worlds. I’ve carved myself out a little niche in the milieu, published two photography books in two years, and I’ve done a few exhibitions that have garnered some attention. It’s the paradox of this country: sometimes things move very fast, and, at other times, with an incomprehensible slowness.
In short, even though I have less and less time to spend on my personal photographic projects, I don’t regret having moved here for one moment and, above all, I’m lucky enough to be able to make a living solely from photography. 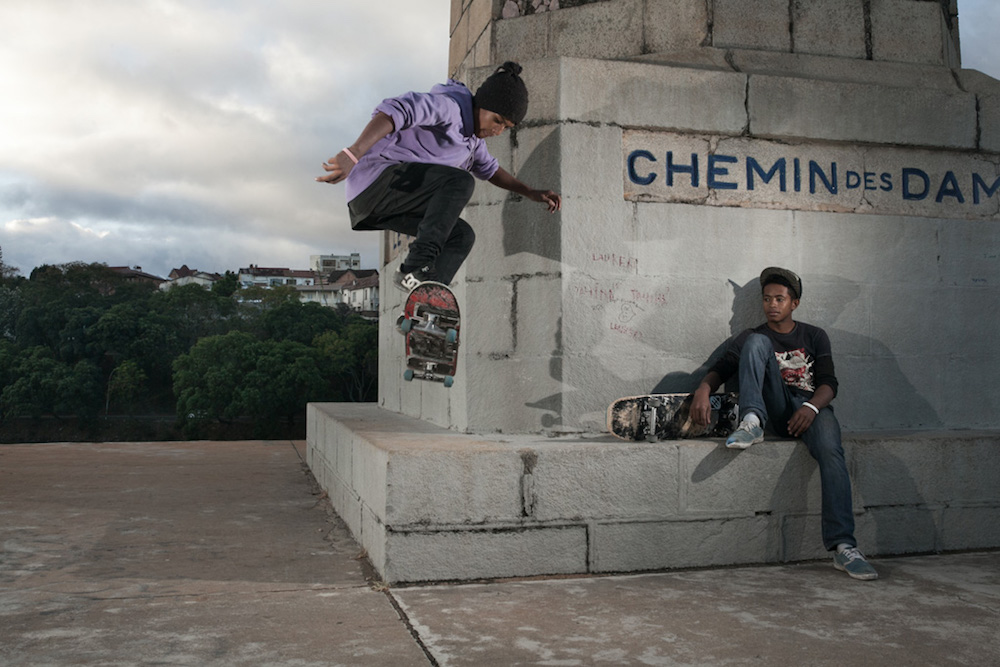 Q: For the series presented here, you followed a group of Antananarivo skateboarders. Can you briefly talk about the city’s skateboarding scene? What do you think these youngsters’ references are? And where are the best spots in Antananarivo to skateboard? In some photos, we see them on and around a monument inscribed “Chemin des Dames”. Finally, are there other kinds of urban culture that you keep a keen eye on?
A: The skateboard movement in Tana is recent. The Malagasy youth’s passion for skateboarding has largely developed thanks to the Internet and notably thanks to sharing YouTube videos, where skateboarders from all over the world demonstrate their art in videos that, I think, are real directorial gems. The Malagasy skateboarders are great fans of internationally renowned skateboarders, such as Chris Cole, Luan Oliveira, or Shane O’Neill. They are inspired by them, and reproduce the figures they see in the videos, with the means that they have on hand.
Yet, Tana isn’t really an ideal skate city: there are no wide, smooth pavements; there’s a certain hostility on the part of the population, who see these youths as outcasts; and it’s extremely expensive for these youngsters to purchase a quality skateboard. But thanks to certain Malagasy associations, the young skateboarders can get hold of equipment. In Tana, the youngsters regularly get together in certain specific spots of the city after school or on weekends: near the Mahamasina municipal stadium, in the Antanimena district, or at the skate park at Ankorondrano that’s been specially created for them by the TV station RTA. There’s also this famous monument located in the middle of Lake Anosy (editor’s note: Chemin des Dames) that commemorates the Malagasy who died during the Two World Wars. It’s big, it’s smooth, and it’s spacious. I really enjoyed photographing them there. The light at the end of the day is sublime. They really helped me to capture these shots because they knew which angle I needed to emphasize the spectacular nature of their jumps. They had seriously studied the question, precisely thanks to their idols’ videos.
I really love these youngsters’ spirit. Lofo, who’s 20 and one of Tana’s skateboarding veterans, told me that, thanks to skateboarding, youngsters prefer to be outside rather than spending the day in front of the telly or playing video games. So they roam the streets of Tana, looking for new spots where they can practice. They reappropriate the city and its streets.
I’m also interested in other forms of urban culture. For that matter, I play guitar in an Antananarivo hip-hop band, a collective of rappers, singers and musicians called Basy Gasy, which can be translated as Malagasy Gun. I love playing with them, when my schedule allows.
Q: What challenges did you face taking these pictures?
A: All skateboarding photos are technically difficult to take. You have to find the ultimate moment to press the shutter. In other words, the moment when the skateboarder reaches the culminating point of his/her jump and the moment when the figure performed is the most explicit. I could have just taken photos of skateboarders in mid-jump, with the movement caught in the flash, but that’s not enough. You also need to be able to see the position of the board in relation to the feet, otherwise the photo has no interest … not for skateboarders, at any rate! That’s where the photojournalist intervenes, for it’s his/her job not to distort the work of those photographed. So, when taking the photos, I always asked their technical opinion for each photo session, while also thinking of the aesthetic aspect of the images, the angle, managing the light, the background, the shutter speed, etc.
There’s one photograph that was difficult to take, not for me, but for the skateboarder I was working with. I was indeed looking for a photo that would be a little spectacular to take. I thus asked Lofo, the most experienced of the gang, if he could do a three-metre jump off the famous monument. He thought for about five seconds and said yes! The biggest risk for him was landing on the granite on his skateboard three-metres down, without snapping the board in half! Indeed, if a skateboarder’s feet are too near the middle of the board, it’ll snap under the weight. He managed it on the first try! As, obviously, in the photo, I shot when he was mid-air, nothing proves that he managed it. So we redid the same action, but the second time I filmed him to at least have proof that it was for real. 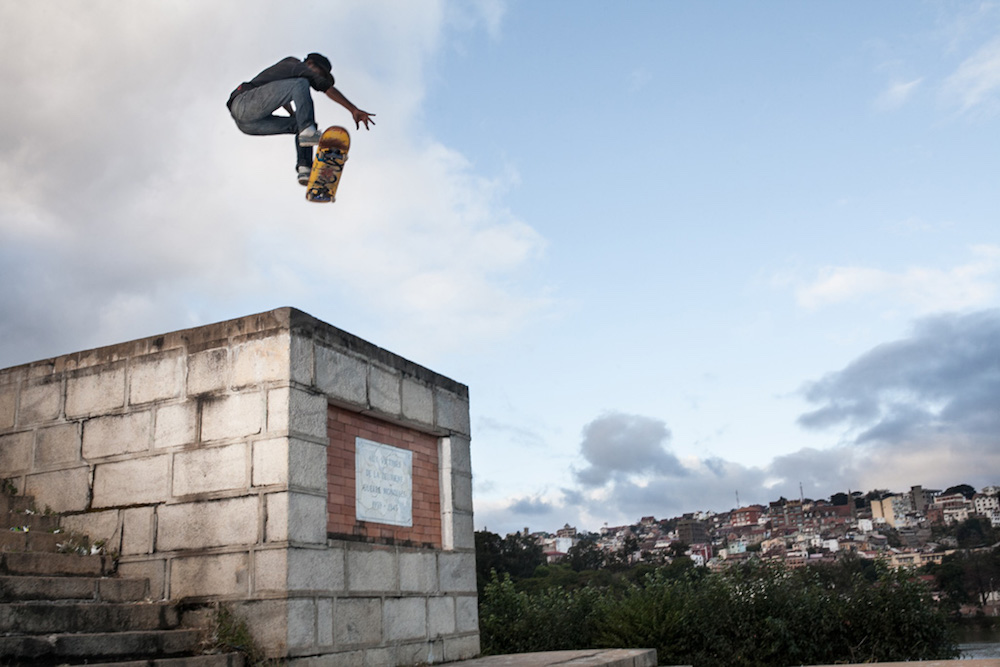 Q: What is the destination of these photos? Where have, or where will, they circulate?
A: This series was commissioned by AFP, with whom I’ve been regularly collaborating since 2013. The Paris office loved the film produced and directed by Red Bull showing American, German, Russian, and other skateboarders hitting the streets of Tana with the Malagasy skateboarders. The Johannesburg office, which I depend on directly, asked me to do this report, which I shot in a day and a half. It was too short to be able to really get into the subject, but working like this is also good training in efficiency and getting straight to the essential for whoever wants to be a photojournalist. The photos are thus exclusively distributed and offered to the press by AFP. 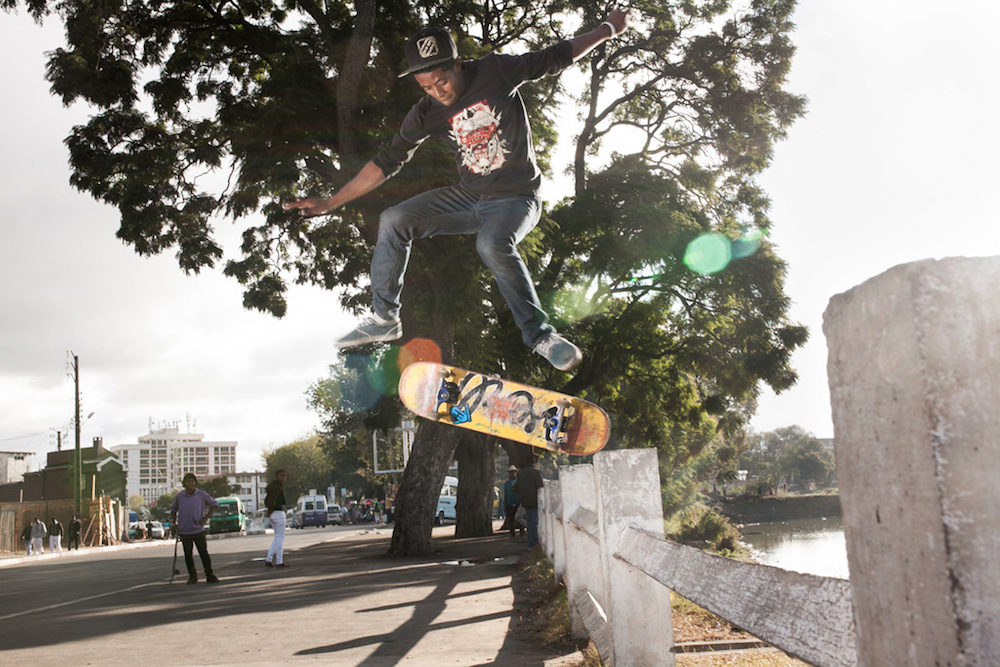 Q: What are your forthcoming projects?
A: My future project is quite simply to manage to publish another book! I believe that all artists, or anyone who needs to express something, should think of a book, an object which keeps a trace of the work done. It doesn’t matter if the book’s a success or not. Of course, we all now have Internet, websites, and social networks to express ourselves and show our work; they are essential promotion tools. It would almost be professional suicide to turn your nose up at this technology, but a photographic book remains, in my mind, the ultimate means to make a mark. The Internet goes too fast: you post something today, and the day after tomorrow everyone has already moved onto something else. A book, however, focuses attention differently; it’s physical, sensual, it’s an object. The photos are living. More specifically, my coming projects include a photo residency in Mayotte in November with other photographers from the Indian Ocean; an arts project for the Francophonies 2016, which will be held in Madagascar; and an exhibition at the Institut Français in Madagascar in February 2016.
Thank you for your time, Rijasolo!
– Leica Internet Team
View the original blog post in French here. Connect with Rijasolo on his website and Facebook.