The Making of Chariot

The Leica camera Blog Uncategorized The Making of Chariot 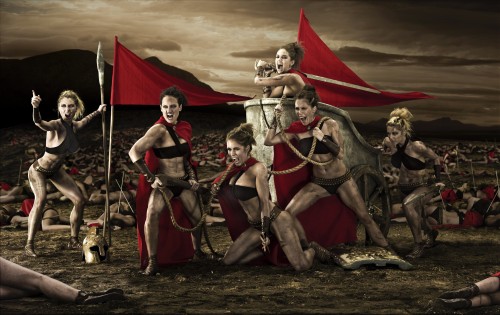 This fierce shoot took place at Jet Studios in London with fashion and celebrity photographer, John Wright. The picture was done with five girls, one chariot, a Leica S2–70mm lens and over 100 shots. The art of this picture lies not only in its master photographery, but also in the special effects. The girls at the foreground of the shot are also the battle victims in the background. It was retouched initially on site to create the first draft of the battle scene, then sent to a retoucher in the USA who did the finishing work on the girls’ bodies. John Wright called the file quality “brrrrrrilliant.”

Here’s a glimpse into how the photo was made:

In regard to the S2 John says, “Leica is one of the premier camera manufacturers in the world and I’m delighted to have this opportunity to be involved with the S-System. My initial experiences have been extremely positive. Ease of use, reliability and incredible image resolution are all essential in my work, and the S2 has delivered in every department. The sheer presence of the camera on the shoots I’ve used it on, its beautiful design and build quality, as well as the instant impact of the Leica ‘red dot’ have all brought something to the whole shoot experience with clients and subjects alike.”

UK celebrity and fashion photographer, John Wright’s meteoric rise to the top of the celebrity photography sector has seen him become the premier provider of images in music, television and show business across the world, creating some of the most iconic editorial pictures of the past few years. His picture of Lily Allen dancing with panthers won ‘Magazine Cover of the Year.’ In March 2010 John Wright partnered with Leica Camera to use the recently released S-System on high profile shoots throughout the year. You can see more of John Wright’s work on his website, http://www.johnwrightphoto.com/ or on his blog http://johnwrightphoto.tumblr.com/.